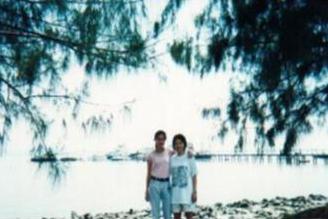 There were lots of experience that changes the way I look at people and life. One notable experience is with an ex-course mate, whom I had disliked initially. Chu Chai Pau (we all have our own nicknames in the groups that we are mixing in) and I was from the same gang during our university days. During our first year, our gang go for lectures and outings together. However as we specialised into our own individual courses during our second and final year, I had no choice but to be stuck with her as only the both of us are in the same course.

Somehow our course lectures always starts very early in the morning (for the entire 3 years I have been there!) and because Chu Chai had problems waking early, she used to skip classes and always requested me to mark her attendance. Come to think about it, she had a serious problem in waking up one long period of time because of watching the World Cup until morning. Once, I was almost caught by the lecturer for marking an attendance of a phantom student.

I could tell that she disliked me for my English-like attitude. To her, I seemed to be very ignorant of my own Chinese culture and too serious with studies. You see, Chu Chai comes from a very Chinese upbringing where she studied Chinese literature, read ancient literature such the “Romance of the 3 Kingdoms” and is crazy about football. But in the end, she really had to admit that she sometimes feel I am so much more traditional in thinking compared to her, haha.

Anyhow I could not tell what that brings into a change of our friendship. I guess I used to go into her hostel to wake her up after class and we will be having breakfast together and chating. Then there were a few times she was not feeling well and I boiled some Chinese herbs for her (I stay outside therefore I have the facilities to cook) and brought out to her in my motorbike even when it rained. Or was it the times when she never hesitated to take me out to buy petrol after my motor ran out of petrol (I have the habit of not filling up petrol so my motorbike used to die halfway). After a while we have gotten to be very good friends and used to go for meals together. She is a typical Taurus and always made blunt remarks that hurt my pride. But there are more things that star sign compatibility such as timing and continuity from a friendship that was probably made long before this lifetime. Of course without effort, everything will come into naught.

Thru becoming her friend, I have learned to balance my emotional side with more logical thinking. I also learned that sometimes people can be very sensitive and keep remarks in their hearts for ages and never tell you. So I try to be more tactful in my choice of words as well. She had also learned to be less blunt and show more warmth and care outwardly to others rather than to reserve it. When we find that we are in the point of getting upset with each other, we will not provoke the situation and both will back down. In the past (during our first year), we will debate on our differing views until we get upset with one another and then will avoid talking to each other for a few days.

Similarly, sometimes we may come across people that we cannot stand or seemed to have conflict. But if we make the effort to get to know and understand the person better, lessons we gain in life can be immeasurable. Look it at like being a part of the yin-yang whereby 2 opposites can be drawn and co-exist in perfect harmony as long as the proper balance is maintained.

There are quite a number of friends who came into my life aside from Chu Chai that I feel are a real blessing. I must really say that I have been humbled by the kindness, generousity and forgiveness from many people. Anyway, as for Chu Chai, I will always miss having this friend by my side who will not hesitate to correct me when I am wrong. She was also by my side at the lowest period of my life where I really need a friend. Currently she is working back in her hometown and I am in the city. Thru these years, we have been always keeping in touch via email messages or phone calls. And I hope that this precious friend of mine will always be blessed with the best things in life.