Picture above is taken from a wall painting in the Burmest Temple in Burmah Road, Penang, Malaysia (click on picture for a bigger view). Below is extracted from the Notes section (page 478) of Venerable Acariya Mun Bhuridatta Thera- A Spiritual Biography:

Spiritual partner. Literally, “one’s partner in developing the spiritual perfections (parami).
Most living beings have an individual, usually of the opposite sex with whom they have maintained an intimate, personal relationship spanning countless lifetimes over many eons of existance. Life after life, those couples who share a deep spiritual commitment will reconnect and renew their relationship, assisting each other to develop one or another aspect of spiritual perfection. Such a devoted companion is considered to be essential for the eons-long quest to become a fully-enlightened Buddha, as Gautama Buddha’s own story illustrates:

In a past eon of the world, as a forest-dwelling ascetic named Sumedha, he threw himself at the feet of an earlier Buddha, Dipankara, and resolved to become a Buddha himself in future. As he made this vow, a young woman bearing incense and flowers stepped forth joyously to congratulate him. He immediately rejected her support, saying that as a forest-dwelling ascetic he was determined to live alone. Dipankara Buddha then cautioned the young ascetic, telling him that every aspirant to Buddhahood had a spiritual companion (pada-paricarika) who was his inseparable partner throughout the long, ardous journey to perfection. After that, through countless lives, the Bodhisatta and his spiritual partner labored and sacrificed together for the benefit of other living beings as they traveled the Path of Awakening.
Here is the Excerpt of The Spiritual Partner (in past lives) of Ajahn Mun (I include in my blog because the story had always touched me)- page 162 of the biography by Ajahn Maha Boowa (translated by Ajahn Dick Silaratano): 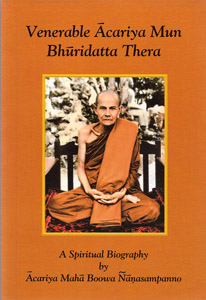 Be careful of ‘relationship-breakers’ or negative friends in your life
How Watching Too Much TV Changes Your Values
Story of a Reformed Rebel
Moving forward in life- even if alone
Of bad neighbors and bad memories
Answers in life....
When your husband leaves you for another woman
When old songs and movies makes us feel nostalgic and sad
If you like this post, say thanks by sharing it: