A friend of mine was surprised when he learned that I’ve travelled alone to Sri Lanka (oh well, I did not exactly backpack there, but I did engage a one-to-one tour). Then he knew about the trips I made to Thailand. Once, I stayed 3 days in Bangkok but I normally travel to remote areas in Thailand. He thought I was a timid person who never dared to take risk.

Well, I thought I was too, until one fateful trip to Thailand way back in 2005 changed my life forever. 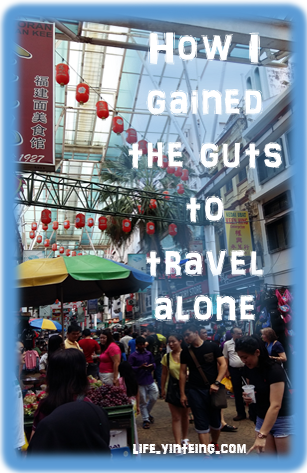 That time, I followed a group of people on my first visit to Thailand. The group was supposed to come back on Saturday. I cannot remember the reason why, but somehow, the organiser booked my flight back on the next day, Sunday, together with a couple.

That time, I was thinking, what the ???? At that point, I have a phobia of sleeping alone in hotel rooms and was really unhappy about the flight arrangement. She suggested that I put up with that couple if I am really that so scared of sleeping alone. What? Being the light bulb and bunking in with a couple (that I hardly know) that obviously wanted the time off together does not sound like a good idea.

As luck would have it, the guy just changed a job and could not take leave for fear his new boss may dislike him. He backed out from the trip last minute. And his girlfriend felt there was no point of going and so she backed out too.

That leaves me the prospect of spending one night alone all by myself in Bangkok. Because the couple backed out less than a week from the trip, it was too expensive to change my return date to Saturday (Air Asia requires bookings well in advanced in order to get competitive rates).

So we went around Thailand, it was my first real trip overseas (aside from my company’s teambuilding trip to Hai Yai – that time we went in a big organised group). On the last day, Saturday, the group left for the airport in the morning after breakfast. I offered to pay for the hotel first as the group needed to rush to Airport (we were late because of visiting Chaituchak). At first, we thought the hotel room was only RM60 per night (that was what the Thai translator told us) but it turns out to be RM250 and we booked a total of 3 rooms! Of course, that means I had to pack out from the room after paying (of course the group paid me back after I arrived back to KL).

There I was, leaving the hotel and waiting at the side of the road, trying to figure out where I am going to put up for the night, without having friends in a foreign country. I felt scared and was broke because I was running out of money. I flagged down the first taxi and wanted the driver to take me to an inexpensive hotel. But the driver could not speak English- I tried to use the Lonely Planet’s phrasebook but he couldn’t understand what I say because it turns out he was illiterate (could not read the Thai writing on the phrasebook).

Then, an adventurous streak in me took over. I decided to flag down the next bus (no air-con) that came my way- and just go where the bus take me. I got in, with my 3 heavy bags and all, and managed to use sign language to tell the bus conductor to give me a ticket till their last stop. He charged me about 13 baht (RM1.30).

I decided to get down at a place where I saw a very busy shopping complex. I walked into the complex- but had to reach it via a series of overhead bridges (Thai people are very fit and even old people can easily go up and down the bridge with ease).

I was tired lunging my luggage around on my then unfit body (that time I don’t have a trolley bag). I went into a bookstore and ask if the person could speak English. When I found out he could, I asked for his help to recommend any nearby hotel that he knew of. He recommended Alexander Hotel, and was kind enough to write the name of the hotel in Thai. Then he asked me to take a cab as the hotel was not within walking distance.

So I followed his instructions and took a cab. The driver (also another one who cannot speak English) took me to the hotel based on the Thai writing. I proceeded to the check-in counter and asked for the room rates. They quoted about RM180 for their standard rooms but told me that the standard rooms were fully booked (I learned later that an international Landmark convention was held at the same time that I was there). But thanks to my lucky stars, a lady manager came out and for some unknown reason, took pity on the poor little stranded scared looking fella in front of her. Out of the kindness of her heart, she agreed to let me have a deluxe room at the price of a standard room.

The room was beautiful. It’s the corner room whereby the windows could see 2 side angles. The bathroom itself is the same size as a standard room in First World Hotel (Genting Highlands). Definitely worth much more than the RM180 that they are charging me for. Sigh, that time, I did not have a digital camera so I did not take any picture of the room or the places that I’ve visited.

After a nice bath, I decided to venture out- since I have the day to kill. I asked the front office reception on how to get to that mall (the one with the bookshop) and she gave me directions. One thing I learn when travelling is that you must cultivate a good sense of direction- else you will get lost.

You have to remember landmarks, ie at which shop you turned and mentally program yourself to recall the way back via the opposite direction. I took along a writing pad in the hotel room that contained the hotel’s name and address in both English and Thai in case my sense of direction fails me and I got lost. And so I set out to walk.

I think that evening I must have easily walked at least 5km. I spent hours just walking, reaching the shopping complex, going to surrounding shops, just walking at the streets by myself. It was fun, and I did not feel lonely- in fact, I have a great time absorbing the scene and reflecting inwardly on the lifestyle of the Thai people.

I look very much like a Thai Chinese, provided I do not open my mouth. As I was alone and carrying my passport and other valuables with me, I almost did not speak to anyone, except if it was to buy drinks or food. 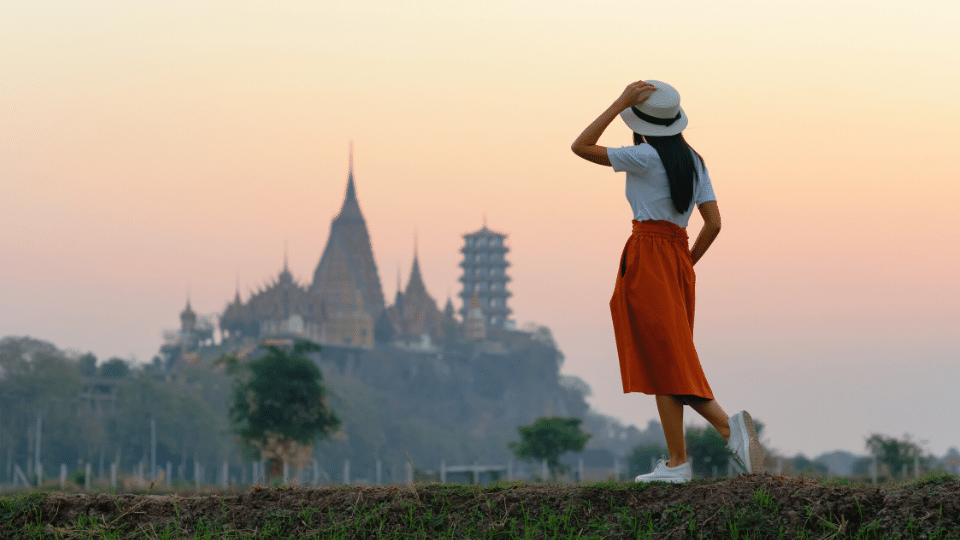 After hours of walking and when sunset was approaching, I got back to my hotel – I memorize the roads and turnings so that I don’t get lost as the hotel is not located in the main road– it is off the main road. I went for another bath (I was sweating like crazy and my skin is as red as a lobster due to walking under the sun without an umbrella). Then I tried to lie down on the bed but was too restless.

When it was dark, I decided to get something to eat. From my hotel room, I saw some roadside stalls were being set up. So I walked a distance, went to Tesco Lotus to buy some bread and then walked to a roadside stall to have dinner. I communicate to the stall owner by pointing what food I wanted to eat and managed to order a cup of iced coffee for myself too.

After eating, I walked along the road- there were lots of stall selling different type of food stuffs. I bought a steamed corn from a poor looking hawker, who surprised me because he could converse in English. I spent about 2 hours walking before going back to my hotel room.

OK, I did mention that I was terrified of being alone in hotel rooms. That time, I still did. Despite with all the lights and TV on, I was still too scared to sleep. I remember dozing off for a while but most of the time, I was just wide awake.

But that one fateful night of being alone in Bangkok took away my
fear of travelling alone, even though it did not take away my fear of staying in hotel rooms alone. It stirred my interest to go and travel alone.

So, the following year in 2006, when my company sent me to Chennai to do a presentation, I jumped at the chance to detour to Sri Lanka- alone. It was quite unnerving the fact that the toilet in the 6-star hotel in Chennai flushes itself about 12.30am every night and the creepy feeling that you are being watched- it was just my luck or perhaps a manifestation of my fears?

Then in Sir Lanka,  I was afraid when I was in the hotel room as the hotel rooms had very low occupancy rate due to the war (not to mention that I went to Anuradhapura, which was a military base came because it was near the Tamil Tiger border).  Except for the nights alone in the room, I love it- it’s not that I have no one to travel with- but places that I specifically want to go were not exactly my friends’ favourites. And I do not want them to waste their time or spend their hard earned money visiting places that they do not enjoy. So I opt to travel alone and normally spend between 10 to 14 days away.

How I eventually got over my fear of hotel rooms and dark isolated places via ‘fight fear with even greater fear’ method. When I started staying in a forest area in Thailand that had no electricity – and by 7pm, it was pitch dark. By 8pm, I could not even see both my hands. It was that dark. After going there about few times, I got over the fear of even the spookiest hotel room- hey, what’s a lighted hotel room compared to pitch dark forest (there are other strange thing that had happened but I’ll talk about them when the time is right).

Giving up opportunity because cannot bear to part with friends?
Even if you hate to study, do it for the sake of your future
The happiest in time is when we are struggling or in hardship
My religious fanatic roommate who sent me a dream
Being Grateful for the Little Things in Life
My dog had died
Lessons we can learn from seniors who work after retirement
Spare the rod and ruin the child?
If you like this post, say thanks by sharing it: