The obvious route will be by airplane. But I will like to share with you another 2 routes on how to travel from Bangkok (capital of Thailand) to Kuala Lumpur (capital of Malaysia).  Distance: about 1200km.

1. The easiest route- by plane

To get from Bangkok to Kuala Lumpur, you can take a 2 hour flight from Suvarnabhumi airport. Normally budget travellers will use Air Asia– it is a very popular choice in Malaysia and tickets can easily be booked online. If you plan your trip early, you can get very low fare tickets. Bear in mind that even though you get free air fare, you will need to pay about somewhere 1500 baht (one way) for the price of fuel surcharge and airport tax. Still, if you managed to get free air fare or low air fare, the price will be almost the same as the 2 routes below. If you book late, the full fare (one way) could range about 3000 to 5000 baht.

You will arrive at the LCCT airport (owned by Air Asia). Please note that LCCT is not the same as KLIA (Kuala Lumpur International Airport). KLIA is a huge, state of the art airport but it houses expensive airlines. LCCT is budget airport. Once you get off the plane and go through immigration and customs, you can take a bus to KL Sentral. There are about 3 or 4 different companies offering this service- but if you arrive between 10pm to 4 or 5am, you will need to wait at the airport because the buses are not 24 hours. Otherwise, it should not be difficult to get tickets- they cost RM8 or RM9 per seat. Takes about 45 minutes (if no traffic jam) to reach KL Sentral.

KL Sentral is the hub connecting major train stations- intercity trains, monorail (have to walk just a bit), KTM Komuter and Putra LRT.  There are also bus services and taxis. If you take the taxi from the airport, it will be expensive- costing around RM70 to RM80 because there are at least 2 toll booths to pass through. Unless you are putting up somewhere near the LCCT airport- else, it is more cost effective to pay not more than RM10 for a bus to take you to KL Sentral. 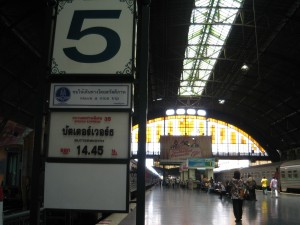 Very important: If you are intend to take the train, PLEASE BUY YOUR TRAIN TICKETS EARLY.

Train tickets sells very quickly- even if you buy your tickets one or two days before, you will not be able to secure a seat. I know many foreigners love travelling on trains. So, buy the tickets from Hualampong station as EARLY as possible- better still, the moment you arrive to avoid dissapointment or not getting the lower bunk.

Journey time: train departs at 2.45pm, arrive Butterworth about 1pm the next day (about 22 hours).

Visual of the train ticket from Bangkok-Butterworth. Buy the lower berth for better comfort

Avoid getting the upper berth because it is quite narrow and you cannot actually sit- you have to lie down. Also, it is only supported by 2 safety belts but with the shaking from the train’s movement, you will fear that you may fall down and would not be able to sleep a wink. 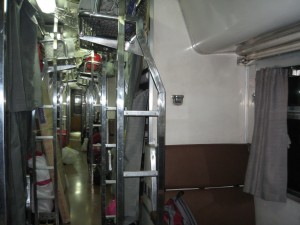 The upper berth is not for the following:

Normally when you first go up the train, the beds are not set yet- passengers will be seated facing one another.  About 7 or 8pm, someone will come along to set up the place.

I would suggest you buy some food- like hotdogs, bread, sandwiches, drinks, dinner pack, to take up the train with you. You can order food from the train but it is much more expensive and I doubt if the food is fresh.  When I was travelling, a lot of Thais actually brought their food pack with them- no one seemed to mind other people eating (but be sensitive to ensure it does not include overly strong smelling food).

You will arrive at the Padang Besar (Malaysia border) station and proceed for immigration and custom checking- take down the luggage. Then you go back to the train and it will proceed to Butterworth.

When you reach the Butterworth train station, you may be tempted to buy another train ticket to Kuala Lumpur or Singapore. I would recommend you get a bus ticket instead. Because bus will take about 5 hours but train will take about 10 to 12 hours. And the Butterworth bus hub is located right outside the train station. You may want to detour off to Penang island first- which you can do by going to the ferry pier (located next to the train station),  and take a ferry across to the island. If you want to get more tips about travelling to Penang, I recommend Penang-Travel Tips.

But if you are going to KL, proceed to the bus station to buy a ticket to Kuala Lumpur- buses normally stop at Puduraya temporarily station (note, previously when Puduraya was undergoing renovations, it was shifted to Bukit Jalil but it is now back in Puduraya- read my article on Puduraya’s new makeover).

How to avoid getting ripped

When you go to bus station, many people will approach you to sell tickets. I am not familiar with other companies- but these 3 companies- Transnational, Plusliner and Konsortium are quite established. They will unlikely to rip you off- but the unheard ones may jack up the price. When I was there, a company that I am not familiar with tried to quote me a high price. Check for the one that sells the ticket at nearest departing time.  A very good super VIP 21 seater cost only about RM36, if I remember correctly.

When you arrive at Puduraya, and decide to take a taxi, make sure the driver agrees to use the meter. I’ve read a few letters to the papers about people (even locals) complaining that some cab drivers refuse to use the meter.  If your accomodation is along the train lines, you can take Star LRT Plaza Rakyat (very near Puduraya). Else, if you want to take Putra LRT, you can either walk to Pasar Seni or Masjid Jamek stations. Or take the Star and change at Masjek Jamek station. 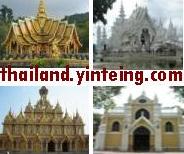 This is the toughest and most tiring route. Unless you want to stop at Hat Yai for a day or two, I don’t really recommend it. There is no direct bus from Bangkok to KL. You need to take a bus from Bangkok to Hat Yai, the  buy another ticket to Kuala Lumpur. Imagine, 1200 kms sitting all the way there- and probably sit at the bus station in transit- really tires you out.  Still, taking buses is definitely faster and cheaper than the train, but more tiring. At least you can lie down at the train. I have not travelled like that from Bangkok to KL but I have done the other way round (KL- Hat Yai- Bangkok).

That’s why, I would suggest if you plan your trip in advance, then book via Air Asia- if you get a cheap or freefare, the cost is probably a bit more expensive than bus/train routes. But it is much faster.

Welcome to Malaysia 🙂 and hope you will enjoy your stay here.