Tomorrow will be the Mooncake Festival- full moon of the eighth lunar month.

The Star paper recently featured the different variety of mooncakes sold by various companies in Malaysia. In the past, some companies can earn more than 50% of their yearly revenue by selling mooncakes alone because there were only a handful of trusted brands in the market. With the introduction of computerized production that reduces manpower, cuts cost and a higher turnaround time, mooncakes are now mass produced. And those age old names, if they have failed to automate the process, they lose out in the competition.

When I was young, mom used to buy mooncakes from an old style coffee shop called Seng Kee- it is located in Petaling Street, Kuala Lumpur, next to the pedestrian bridge connecting to Kotaraya. The mooncakes in Seng Kee were all made by hand and as the mooncake festival neared, the workers in the coffee shop would be so busy making mooncakes. As you buy, you can see them doing the dough, putting in the ingredients, etc. The mooncake had no preservatives, so production only began about a month before mooncake festival and sales only started about 2 weeks before the date.

Seng Kee was around for a long time before modernisation have taken over- I was told that once, a dinner was held for my great grandfather there- and my great grandfather had passed away decades before I was born.  The restaurant was probably built close to a hundred years ago.

Today, the coffee shop is no longer there- the anciet 3 storey had been torn down and rebuilt. McDonalds now stands in its place.

Because the price of mooncakes have gone to be so expensive, we have learned to make some- mainly for own consumption: 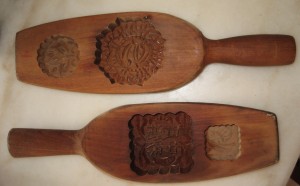 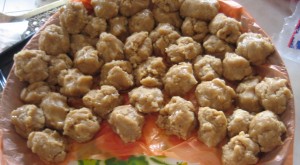 mooncake skin- used to wrap around the lotus or nutty paste.

That goes to say, when the going gets tough, the tough gets going. When the price gets ridiculously high, learn the trade and make yourself so that you can consume and give away to your heart’s contend 🙂

Perhaps it is going with modern times, but most of the younger generations would prefer the derivative mooncakes like the agar agar (jelly) mooncake or those with chocolate, pandan or yam flavours. It is far from original- therefore, one day, traditional mooncakes, especially the kam tui (nutty mooncakes) would be very rare.

You can have a look at how modernisation has taken over the mooncake industry- I have thought of archiving the mooncake designs this year- they inspire creativity in us because of the rich variety of colours, texture and designs.