My brother has deep resentment for a group of people known as Dr Evils who were involved in torturing the innocent during the World War Two.  Instead of being punished for war crimes, a deal made with General McAuthor- if they are willing to impart their knowledge to the US government, their lives would be spared.

He told me that many innocent victims were being tortured to death, for example, open surgeries were performed on them -with the victim fully awake without anesthesia in order to do research on the human anatomy. Or they were fed with certain chemicals and had to die a slow painful death just to determine how these chemicals would work. These humans were treated like lab mice.

After the war ended, these Dr Evils were released and most of them went on to led successful, long and prosperous lives- some started huge companies and some were well known professors lecturing in university.

The above is an extreme example. Even in our daily lives, there are situations that constantly made us ask the question, ‘why bad things happen to good people while bad people get away with doing bad things?’  Because of this seemingly unequal world, some become disillusioned, while some have used it as an excuse to seek personal justice or to commit evil deeds. After all, they felt there is heaven/hell or rewards/punishment. 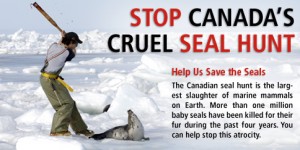 Image from http://earthfirst.com/. Hunters would learn that there may be a price of pain in the later years or a short life- I’ve known many real cases.

Personally, I do not think that anyone would ever get away from doing anything bad- even as small as a bad thought can affect us in future.  For some people, the effect takes place immediately whereas for some, it takes time to bear fruit. I would rather see the effects sooner than to have them all come at once- with compounded interest.

It’s just like when people started to continuously overeat. Some people will gain weight almost immediately, while for some, it take a while.  If we can see the results of weight gain on the scale, we would do something about it. If we do not, we may think we can get away with it and continue in our ways- till one day, our health suffers. A number of people who do not seem to put on weight no matter how much they eat (and they never exercise much) ended up developing blocked arteries, cholesterol and some, digestive cancers in their later years.  Each of our bodies are made differently.  But the one who can see immediate affect through even a bit of overeating and took precautions- like doing exercise and trying to eat healthy would stand a better chance of maintaining good health.

My former boss who is a Catholic told me that she really believe in ‘what goes around, comes around’.  In her position, she was sometimes being sabotaged by ambitious people who wanted to get up- yet, she never once changed her strong principles and work ethics.

She told me, a person who does bad things and harm others may not get it back in his career, but it could be in other areas of his life, like family or personal relationships. She had seen it happening to a number of people she know in her real life that she would rather be safe than sorry.

When I was young, my mom also worked alongside with other young mothers. In certain departments that they were being transferred to, some matrons were quite nasty- for no apparent reason.

They could just hate you by sight and need not justify their actions. In the olden days, there were no workers right- my mom and her friends never dared to go against their superiors for they would risk being transferred to small obscure villages for minimum 2 years. As a group of young mothers who need to look after their babies, she said they all would shiver at the very word of “transfer”.

As the years passed, my mom kept in contact with her friends and have heard a number of unfortunate incidents befalling some of the nastier matrons. One who had the reputation of being real nasty to nurses suffered a stroke that left her paralysed from the neck downwards.

We would buy insurance to cover ourselves for any eventualities- so that our families need not foot our medical bills.  Or we would pay extra for MRTA or MLTA coverage for our home loans so that the entire loan would be paid by insurance and our families would still have a roof over their heads should there be sudden death or permanent disability on us.

It’s the same for our decision when it comes to choosing to do good or evil. If we do not harm others, we sleep better at night, we need not always look over our shoulders and be on our guard. It is a totally liberating feeling to be able to look up in the sky and know that your conscience is clear.  After all:

Of course bad things do happen to good people. There are forces at work that are too mysterious and complicated for the human mind to discern. The best way is to learn to take care of ourselves, our conscience- to remain stable and solid despite the lurings of the world. If we can do that, there will be no fear no matter what happens.

And about Dr Evils, yes, they’ve done very bad things in the past. If a child has been raised from young and influenced by a charismatic figure to kill and punish others for some perceived deeds, their belief systems would not perceive their acts as wrong and beneath human levels.

But now that they have their own families and live in a society with totally different value, they would come to the realisation that what they’ve done was very wrong. The remorse would be something that they would have to carry with their entire lives as well as the afterlife. And it is a terrible, terrible feeling.

Sometimes we forget that anyone could be a Dr Evil- if the person have violent inclination and born and nurture by role models that that taught them nothing but violence.

Whereas a child who have predisposition of violence and like to inflict harm on others could grow up to be a kind and nurturing person if the environment and the circle of influence ingrained such values on them. Therefore, we should count ourselves fortunate that we are not born in war zone or environment whereby the only way to survive is to commit crime.

Perhaps it is deep remorse that made these ex-Dr Evils became part of the driving factor in the Japanese economy- setting up companies that provided jobs to families, enabling Japan to rise from the ashes (literally) after the war. And providing a good solid education (as educators and professors) that give a knowledgeable generation.

The past could not be undone- instead, once we realise that it’s a huge huge mistake, there is nothing anyone could do to go turn back time. The only way, is to go forward with life and see if any amends could be made.

Even if you hate to study, do it for the sake of your future
My religious fanatic roommate who sent me a dream
Giving up opportunity because cannot bear to part with friends?
10 Personal lessons I have learnt
When you were given a bad Chinese name- does it affect your life?
Is it wrong to take money from bad people for a good cause?
Can our offerings reach the departed relatives
When old songs and movies makes us feel nostalgic and sad
If you like this post, say thanks by sharing it: