Effective January 2010, the government made every Saturday as a non-plastic bag day. This is after numerous public campaigns requesting people to use less plastic bags without much success. There was even a hypermarket that had implemented it earlier but I am sure that due to the fact that we are so used to pack everything in plastic bags, the hypermarket would have suffered a drastic drop in business. 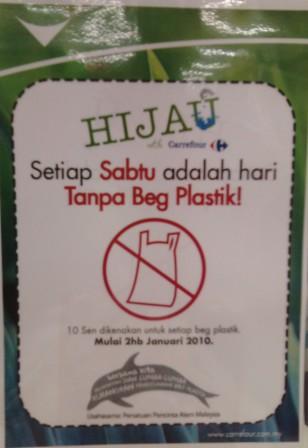 Initially when Saturday, one of the busiest grocery shopping days of the month is being introduced, many consumers were caught unaware. Those who came by public transport had no choice but to pay 20 sen for each plastic bag (only on Saturday- other days it is free). Grumbles and complaints were heard around as the cashiers politely tried to educate the customers at the check-out counters.

Few months down the line, the campaign (together with lots of awareness created in the radio) seems to be quite effective. Today, more and more people bring their own recycle bags for shopping and to hypermarkets- even on days of non plastic bag days. In the end, the consumer finds it easier to just put everything neatly in a few recycle bags when it comes to unpacking later at home.

Well, sometimes when the government intervenes by making it compulsory, people will grumble initially because of the inconvenience but will come around it once they are used to. With the radio ads about reducing carbon footprint, it made people feel good to be able to do their bit for the environment.

Instead of throwing your items away, try to send recyclable items straight to the recycle bins. Recycle bins are all over the place if you look around. Clothes, glass, paper, and other household items that are in good condition can be given away so that it can be sold to help others. And recycle shops like those operated by Salvation Army or the one in Summit USJ does sell good conditioned items at very low prices.

You can also sort out paper waste for your office cleaner- they may usually sell the paper for a little side income. The cleaners in our building are always willing to collect paper- the more the merrier and sell them at recycling centers. 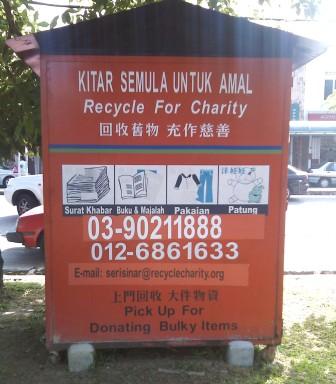 You can carry Tupperwares or steel containers so that they can be taken out anytime to pack for food instead of having to use plastic bags. Furthermore, it’s not that healthy to have food, instead of hot ones in plastic bags and polystyrene packs as the chemicals contained there would easily leech into your food.

Switch off electricity when not using

Do it at least to save money- electricity bills are getting more expensive now.

But others are not doing it- so why should I?

Many people are not in this bandwagon together. Even for me, some ideas still take a bit of getting used to. But it does not matter of others don’t participate. It matters as we do.

After all, we can only educate and create awareness to influence the actions of others. But ultimately, we have no control over choices that other people want to take.

The only control we have, are on our own actions.