Stray animals really have resillient hearts. Despite constant hardship of hunger, thirst, no shelter, vulnerable to the elements (rain, sun, thunderstorms), they still survive day to day. Even though life is tough and all they know is fear, hunger, cold, thirst, fleas, extreme itch, pain and injury, they still keep going. They never give up- until and unless the end of their lives have come.

Often, people moan, gossip and complain when things do not go as they want. Sometimes depression and suicidal thoughts come in. But for these strays, they take it one day at a time. In a way, we can learn from their resillence- life often does not happen the way we want and there would be understandable down times. We think we can’t possibly live through the hardship and misery- but you know what, somehow, we’ll survive.

The key is to be resillient until the storm blow past and the sun shines again.

Let me tell you a story of 3 strays- Jessy, Bobby and Spotty (names that I give them).

I have seen Jessy around for the past few years and also have seen her mom (the mother has black spots while Jessy has brown ones). Well, Jessy had been pregnant a few times and each time she delivers, her concern is to look after her pups- trying her best to hide them away from sight. Often, her pups are stolen or taken from her. You would see her frantically searching for her pups- trying to strain her ears to hear the cries of her pup. But one by one the cries disappeared.  She would look so lost for days- but then, life goes on….

Many people walk past her along the busy street- but I wonder how many people thought of giving her some food and water. One day, I bought along some food with me- I know Jessy and her friends hung around the area so I thought at least I could feed at least one of them. 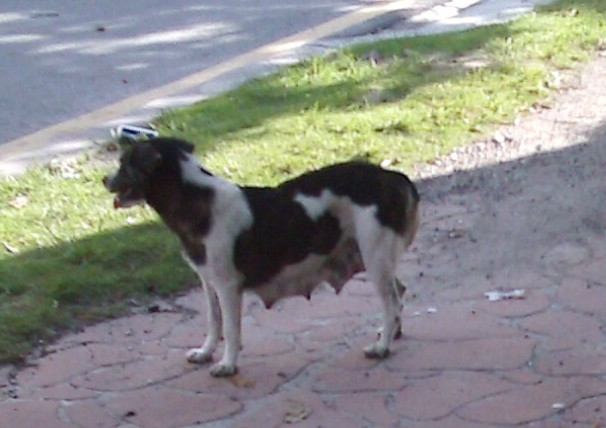 So happened, Jessy was around- as you can see from the picture above, she had just given birth. What you do not see is how hungry she was. Jessy was wary even though I made gesturing sounds indicating I have food with me. She was too used to being hit with sticks and have stones thrown at her that she was instinctively afraid. 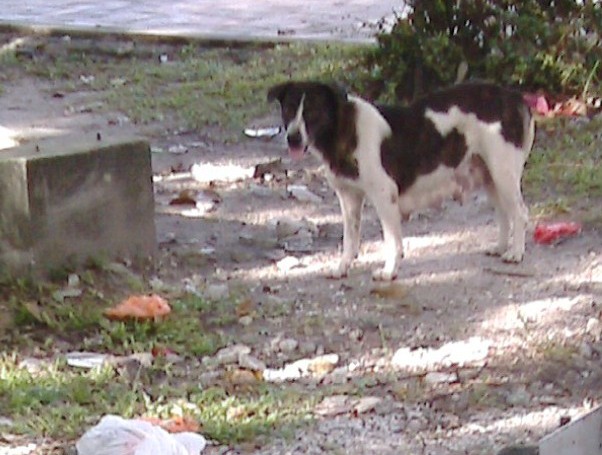 I laid down the food and then walked a distance away. Jessy looked at me and then at the food. Seeing that I am a safe distance away, she approached the food (picture above)- does she looked as if with gratitude? You should see how hungry she was when she ate the food. Really, she was so hungry- I wondered how many days she had not eaten.

Bobby is quite a special dog to me. Previously when I walk alone in the dark street at a particular area- Bobby would sometimes walk alongside with me if he saw me. Sometimes he is not in that area so he did not walk with me. But if he sees me, he’ll walk in front or alongside of me. It’s as if he wanted to make sure I got to my destination safely. Few times, it was late at night and I was walking alone- and out of nowhere Bobby would appear and he just led the way. He had accompanied me a few times for the past few years. I usually drive now so I don’t see Bobby often. But I am glad I was able to finally take a photo of him recently and happy to know that he is still alive. 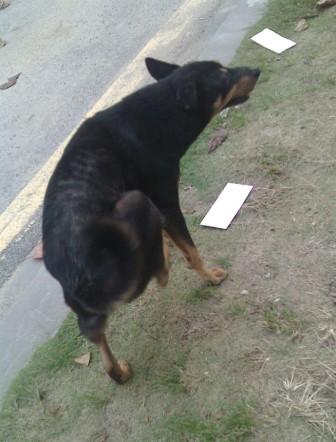 On the day the photo was taken, I was actually walking around the area alone and Bobby suddenly crawled out of a car that he was resting under when he saw me. He then walked along side of me and then walked in front. When I reached my destination, we would part ways- but he would only stop accompanying me when I go into a building (and he can’t coz he knew he would be chased by the guards).  Once, I tried to feed him food when I saw him halfway but he ignored it and he walked with me.

It was a rainy evening with heavy thunderstorm. Spotty was running all over trying to look for a place of shelter away from humans. He seemed very afraid of human beings- perhaps they had beaten up or throw stones at him.  Spotty was wet, cold and very hungry. 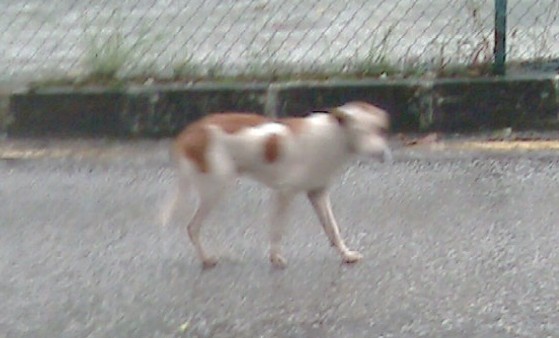 Tired and drenched by the rain, Spotty tried to take shelter behind some bushes. 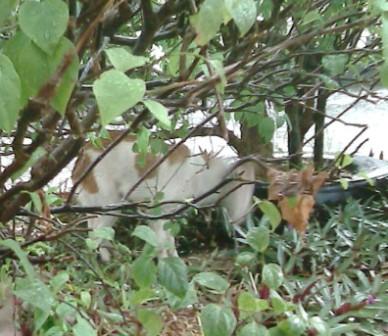 These are a few strays that I know. No doubt we cannot feed all the strays in the world but we can do what we can. If you know that there are stray dogs or cats near the area you work, stay or at places that you frequent, why not take along leftover food with you. Most of the time we just dump unfinished food into the dustbin. Why not put the food and then place it at a corner where the strays usually hang out. Friends who know me know that I may sometimes ask them for chicken bones, unfinished rice or food that they plan to throw away to feed the strays- they smile when told that they unfinished meal would feed some very hungry strays.

Take the food and wrap them on a piece of paper then into a plastic bag. Then when going to the area, take out the wrapped food and place it near the grass at an inconspicious corner- remove the plastic and just lay out on the paper. You can go back and check the next day- I am sure you would find the food missing.

And ignore others who stare at you. After all, if we are so afraid of what others would think instead of doing what our hearts think is right, then how can we be ourselves? In the beginning, I was quite self conscious but with habit, it does not matter to me anymore what other people are thinking. Later, I even see other people doing the same thing- ie nearby residents taking food and water for the strays.

Strays are not just some worthless public nuisance. They are beings with feelings like we do.  It costs us nothing (of course, you are welcomed to buy pet food that are on sale for them if you want do). We cannot save all the strays in the world but we can make one stray less hungry each time we decide to feed them.

Resigning from the job and plunging into the unknown
Gifts can be a blessing or a curse
Don't only make affirmations- follow up with plans and action.
Astrology vs the Temptations of the Modern World
Human Life- last talk by the late Chief Reverend
The danger of windfall wealth
No point of revenge or getting even
My dog had died
If you like this post, say thanks by sharing it: