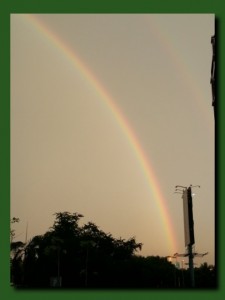 I took this picture yesterday evening…many of the folks in our area witnessed a double rainbow. Friends staying in KL and PJ posted their status updates and took pictures of the double rainbow. It was also the new moon of the first day in the Chinese 7th lunar month I saw the rainbow as I [...]

Even though I am using a Samsung Note 2 now, there are times I still miss having a Blackberry. No doubt, people think that Blackberry belongs to dinosaur and there have been mention in forums about those Crackberry die hard users who refuse to accept facts or reality. Still, there is something special about the [...]

There are a number of blogs that I follow because these authors write quality content that are beneficial. Some of them are: 1. Personal Finance for Christians (url: http://www.christianpf.com/) Bob (and his entire department) was laid off in 2008 when a larger firm bought over his company. Instead of looking for a full time job, [...]

Update in 2017: Instead of using WPTouch, I have bought a paid Wordpress theme, Thesis wordpress theme which is automatically responsive and mobile friendly. After my earlier post where I mentioned that I would be installing WPTouch plugin after wanted to make my blogs more mobile friendly. Just yesterday, I have removed the plugin from [...]

One of the challenges that a full time blogger must be willing to undertake is the uncertainties and strong dependancy of earnings based on Google’s traffic and search rankings. A change in Google search algorithm could drastically bring down traffic earnings – and this uncertainty is one of the main factors that prevented me from [...]